Beko Donates Over 1600 Appliances To Communities With #BekoGiving Initiative

02/07/2020 We have been going the extra mile over the last three months to give back to communities with our new #BekoGiving initiative.

Launched in response to Covid-19, we sought to support the NHS on the frontline of the crisis, as well as charities and services helping the vulnerable during the pandemic. 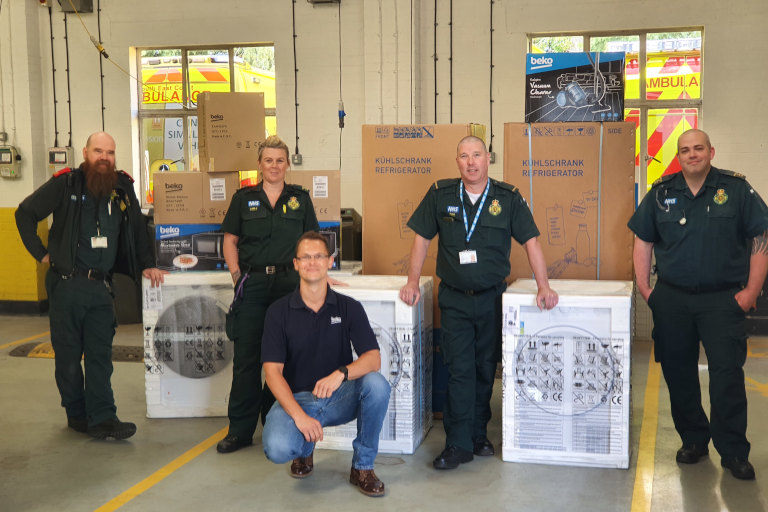 Zoe Larter, NHS Ambulance Service, said “Staff at South Western Ambulance Service NHS Foundation Trust would like to say a huge thank you to Beko for their incredible donation of over 400 appliances to South Western Ambulance Charity. These donations include refrigerators, washing machines, kettles, toasters, coffee machines and microwaves. These are being distributed amongst ambulance stations and other sites across the trust.”

Dr Aniko Deierl, Consultant Neonatologist at NHS Imperial Hospital, said: “We were overwhelmed by the kindness and generosity from Beko for its fantastic donation to our NICU. Our matron and team were so grateful – a big thank you!”

Vijay Bhardwaj, Marketing Director at Beko UK & Ireland, said: “With everything going on in the world right now, we’re proud to be able to donate to those that have not only offered fantastic care to the nation during this crisis, including the NHS and care homes, but also the charities and services that support the vulnerable in the community. As a company we strongly believe we have a responsibility to give back and this new initiative has enabled us to do that.”

Beko has a history of working with charities. Our seven-year partnership with Barnardo's has helped raise more than £200,000 for families in need. The Salvation Army, Sports Relief, KidsOut, and Macmillan Cancer Research have also benefited from donations.