Beko Kicks off its tour of schools with The FA Cup 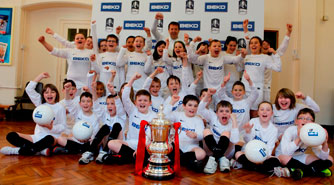 Beko has partnered with children’s newspaper First News to choose ten schools that will each receive a visit from The FA Cup as part of the Beko Schools FA Cup Trophy Tour.

Ten lucky schools were chosen from the hundreds that entered Beko’s competition by submitting a photograph of a class, club or school team posing with a cardboard cut-out of The FA Cup. The competition was judged at Wembley Stadium by First News editor Nicky Cox, football legend and FA Director of Football Development Sir Trevor Brooking, and Beko Marketing Director Teresa Arbuckle. The judges commended the winning schools for the creativity displayed in their entries which included everything from giant replicas of The FA Cup made from tin foil to recreations of famous FA Cup scenes.

All ten schools will receive a visit from The FA Cup during the Beko Schools FA Cup Trophy Tour which starts in February and runs until the end of March. Four of the schools also receive a visit from an FA Legend who will host a training session with some of the winning children on the day.

Teresa Arbuckle, Marketing Director at Beko continues: "The calibre of entries we received in this competition was fantastic so we can’t wait to begin the tour and give school children around the country their chance to see this legendary cup. This activity is also giving us a strong platform to communicate the benefits of Beko appliances to busy mums and their families."